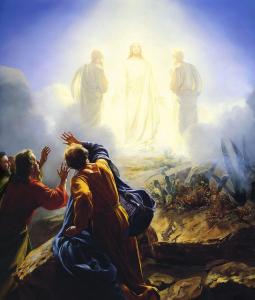 Feast of the Transfiguration of Our Lord

Well, the last time I posted, I had not even begun grad school at Sacred Heart Major Seminary in Detroit. I hadn’t even bought most of my textbooks yet!

Little did I know then what those two years would hold for me intellectually, personally, and spiritually.

A lot has happened in the time since August 2013.

Needless to say, I have since completed my Masters. I can honestly say that I could have NEVER asked for a better experience. I was not just intellectually formed but my heart and soul were fed and sustained there as well. The students, faculty, and staff there are really on fire for Christ and for helping others encounter Him. The programs the courses are great (I can take courses there now with a sizable alumni discount) and one never has to question the solidity of the content or the professors teaching; they are all top top top shelf.

I took courses for three semesters full time. I would get to the Sem by 10 in the morning and be there sometimes until 10 at night. Once thesis time rolled around, I would be there six days a week. Needless to say, it became a second home for me (and still is) and everyone there became an extended family for me (and they still are).

While I was taking courses during the Fall 2014 semester, I began to research my approved thesis topic: Mary as Woman of the Eucharist in the Theology of Pope Saint John Paul II. By the beginning of the Winter Term 2015 (my last semester), I had come up with a schedule wherein I would write a chapter of my thesis every week (7-10 pages) in time for my defense at the beginning of April. Oh, and I was taking Trinity and Christology in addition to thesis work. NBD.

And you can bet your blessed beads I LOVED every second of it. I really believe that I thrive in the midst of academia.

Well, my defense got delayed a little bit because the priest-prof I wanted to be my reader (an MA Thesis has a director and a reader) couldn’t do it Winter Term so I ended up defending in June of 2015. It went very well and my dear Best Priest Friend (BPF) drove ALL THE WAY from the northern outer reaches of the AOD to come to my defense (he must have ran out of morning Mass to make it).

Now, I have a nicely bound (in blue, of course) edition of my 70 page thesis 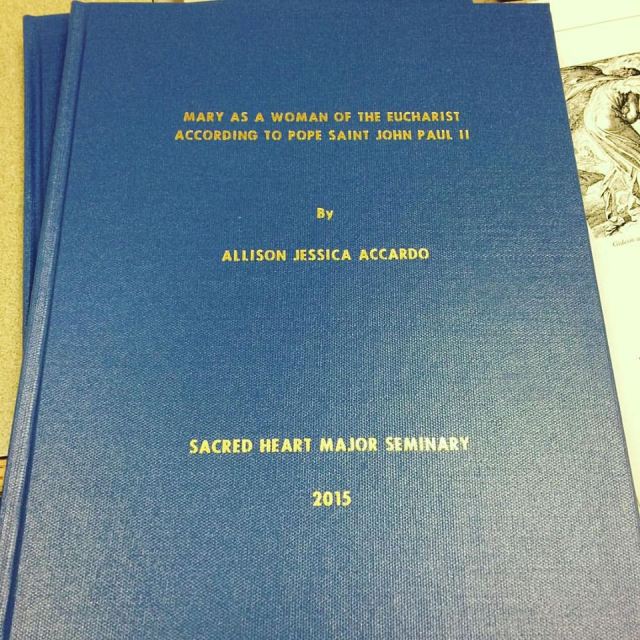 Oh, and I also have this very very very nice piece of paper which is basically the consummation of a dream I have had since I was in seventh grade. 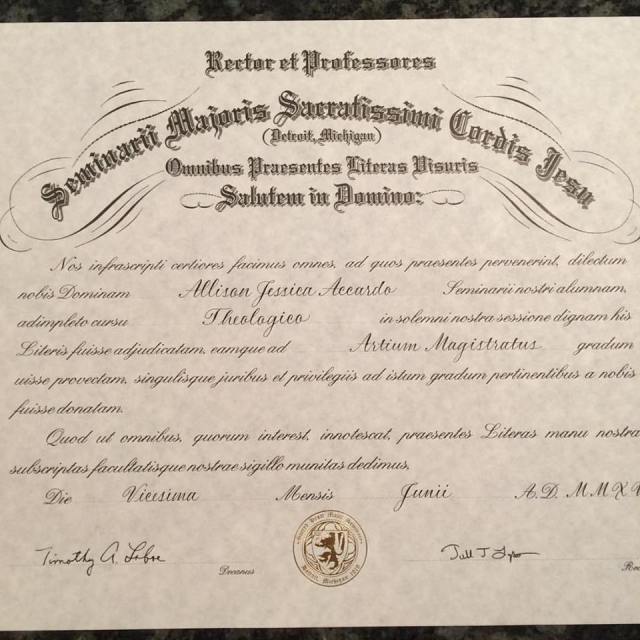 During that time, I also applied to the PhD programs at Notre Dame and CUA for Systematics and Liturgical Theology. It wasn’t God’s will … at least at that point.

After I graduated, I embarked on the journey that all grads enter into: the harrowing world outside of the warm womb of academia and into the job market.

I applied to some positions: some parish jobs but mostly high school theology teaching positions. One of them popped out to me: an all girls Catholic high school that happened to be the cross town rival of my high school alma mater.

I applied, sent in my resume, three letters of recommendation (a couple profs among them), transcripts, etc..

I got a call back for an interview!

I went to one interview with the head of the department (my immediate superior nowadays) and the Dean of Studies.

They asked if I could stay for a second interview with the Head of School (think Principal).

Ummmmmmmm, yeah. I can.

I went to that interview (both went pretty well, I think) and was told that I would know within a week or so.

I am in my car driving back home and my phone rings. It’s the school. It’s the Dean of Studies.

She says she would like to offer me the position.

I ask her to hold for a moment.

I mute my phone. Roll my window down and shout a very happy (and grateful) YAY into space as I sit stuck in rush hour traffic back into the city.

I unmute the phone and calmly accept the position.

I immediately call my parents, my BPF, a couple other priest-friends, and some other friends.

Then I prepared to begin the new journey of teaching high school Theology.

I was nervous as heck and I had a few hiccups, some missteps, and some “what was I thinking” experiences and I am sure I will have others in the future but I was offered a contract for this coming school year.

My first year, I taught sophs and juniors.

Sophs studied Soteriology and Ecclesiology. Juniors studied Sacramental Theology and Moral Theology. They weren’t expressly called those things per say but those were the theology topics they covered.

I loved it. I wish I could have had this stuff when I was in high school. Instead, I had feelings up the wazoo and my senior year, I learned how to use different forms of contraception (you know, just so I know, not that they were endorsing or encouraging their use). Maybe, if I was actually being fed, I would not have needed to sneak Ratzinger into class to read it on my lap during class. (I got good grades in religion all four years btw)

This year, I am teaching frosh and sophs.

The frosh will be learning Biblical Theology first semester and Christology second semester. I have to get the teacher’s guides for each of those so I can start lesson planning for first semester.

Since the school is college prep, I have tried to make it as much like a college class as I can while keeping it age appropriate. I am still working on that but it seems to have worked pretty well last year with how my students did. And I am not an easy grader. Nor do I believe in substantial extra credit. They might get a couple points added to the 50 point participation grade but that’s usually about it unless they really dazzle me.

I think one of the most amusing requests for extra credit was when one student asked if they could summarize a part of my thesis.

I looked at her incredulously and said, “You do realize that I wrote that thing so you can’t make anything up. It’s neigh on impossible to BS this one.”

She looked at me kind of defeated, “Oh. okay.”

So now, I am getting things ready to start a new school year. The summer went by quickly and I didn’t get done what I had hoped I would but it will work out according to God’s will no matter what.

Oh, and I am going to polish up my resume, write out a nice letter of intent and drop it off at the Seminary.

Because my dream of dreams would be to be a professor there one day. I figure it can’t hurt to get my foot in the door with a possible adjunct instructor position for undergrad courses. I need to earn my doctorate or something like that.

But that opens up a whole other can of questions: Where? Will I get accepted? If I get accepted, will I get funding? What area of theology will I study? That’s all in God’s hands no matter how much I would like to have control.

This post has gotten long but I wanted to give you all an update of what has happened in the last three years. I would say I summarized it pretty well.

What led to my coming back out of the binary ethers of the Interwebz? I was at an EF Mass at Old Saint Mary’s in Detroit last night and I was talking afterward with one of the other attendants of the Holy Mass. When we were introducing ourselves, he told me that my blog was somewhat well-known for its articles (and I thought only a few friends were reading my rants). That was kinda the last straw for something that had been popping into my head for a while: bring the blog back. So here I am.

Now, please, don’t expect frequent updates, especially once school starts kicking into gear in a few weeks but I will try my best to post more often than I have in the last three years (I can’t fail that one if I post at least once!). Once school starts, I will be back to waking up before God (4:45 in the morning) and being out the door by 6 to beat traffic so I can be at school by 7.

I already went through and cleaned up the links and updated the veiling page that is along top. But as I get time, I will go through and clean other things up so please forgive any dead/broken links.

Well, I hope y’all have a great day!

I am a Catholic young woman who works as a Theology teacher at a Catholic high school in the Archdiocese of the Detroit. In Spring of 2015, I graduated with an MA in Theology with a concentration in Systematic Theology. My MA thesis was titled: "Mary as Woman of the Eucharist in the Theology of Pope Saint John Paul II." I also hold a BA in Theology (with a dabbling in Philosophy) and is a member of Theta Alpha Kappa (θΑΚ), the National Theology/Religious Studies Honor Society. Prayers are appreciated.
View all posts by Ms. Allie →
This entry was posted in Grad school, Musings, Update. Bookmark the permalink.

What do you think? Cancel reply